In HBO’s ‘And Just Like That’ finale, a ‘they mitzvah’ challenges Jewish traditions

The previews for the season finale of “And Just Like That,” the “Sex and the City” reboot airing on HBO, suggested that viewers would get to see a “they mitzvah.”

And for most of the episode, which began streaming Thursday, that’s exactly what seemed like was happening. Charlotte (Kristin Davis), who converted to Judaism in the original series, is busy arranging the details for a gender-neutral Jewish coming-of-age ritual for her younger child, who recently began using “they” pronouns.

The family’s approach is in line with how many Jews and Jewish communities are handling bar and bat mitzvah, the Jewish transition to adulthood that happens at age 13 (or 12 for girls in some communities). The name of the milestone is traditionally gendered, so boys become bar mitzvah and girls become bat mitzvah. 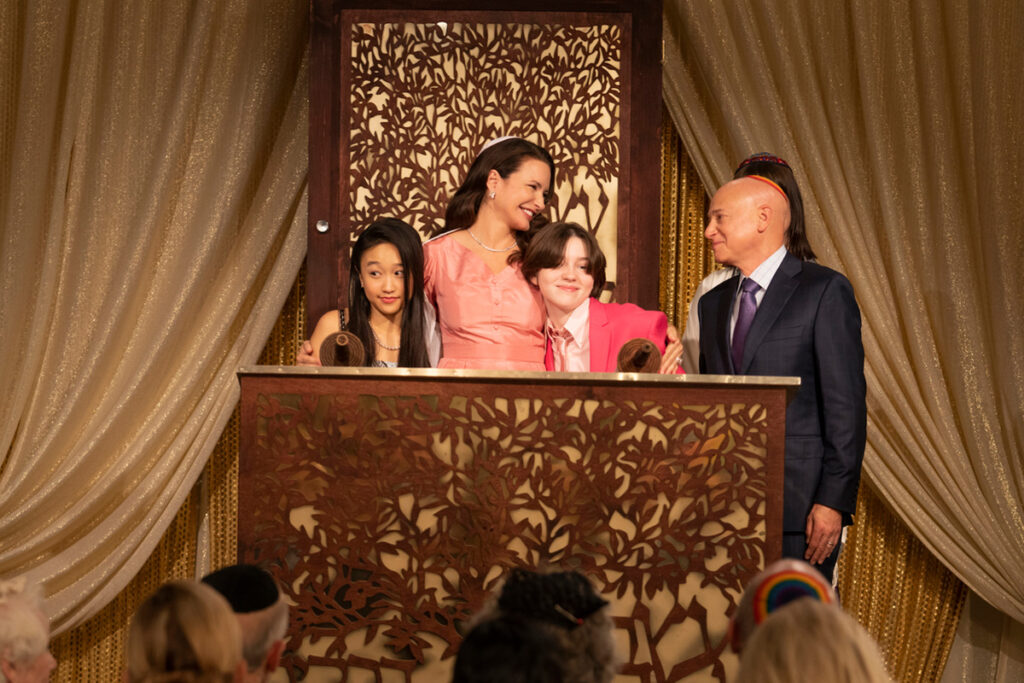 But as awareness and acceptance of gender identities beyond male and female have accelerated, many communities have sought to frame the milestone in an inclusive way. Some use the abbreviation “b mitzvah” for all children; others have held “b’nei mitzvah,” using a Hebrew plural word, for just one child. Using the pronoun adopted most widely by people who identify as nonbinary, Charlotte is planning a “they mitzvah” for Rock (Alexa Swinton).

Charlotte — a consummate traditionalist — and her Jewish husband Harry (Evan Handler) seem both delighted and disquieted by recasting the ritual for their child.

They buy up rainbow-themed kippahs and decorations for the party and hire a transgender rabbi (played by Jewish transgender actor Hari Nef) to work with Rock. “Who better to lead a ‘they’ mitzvah than a trans rabbi?” Charlotte exclaims. “It’s bashert [destiny]!”

But when their friend Anthony, the proprietor of Hot Fellas Baked Goods, suggests going with sourdough challah loaves — “Behold! Chot-fellas challah,” he announces, with an exaggerated “ch”— Harry balks.

“It’s hipster challah,” he says. “We’re already pushing the envelope with this ‘they’ mitzvah. Can we please give the old Jew something they’ll recognize?”

Perhaps the most significant departure from the traditional bar or bat mitzvah is that the family appears not to belong to a synagogue at all. Instead, the Goldenblatts are seen working with freelance rabbis to plan an event on their own. This path is being taken by more and more families who want to mark their children’s maturity within the Jewish tradition but who, like the vast majority of Jewish adults in America, are not members of a particular synagogue.

The family also appears to be planning on an unusually condensed timeline. While children typically prepare for months or even years to read from the Torah for the first time, help lead services and give a speech to their community, Rock cycles through multiple rabbis just weeks before the planned ceremony.

Rabbi Jen, the transgender rabbi, takes aim at the timeline when she meets with Charlotte and Harry. “Great kid, totally unprepared, complete disaster,” she tells them about their child, who prefers to play video games than prepare. (This may be the most conventional aspect of the family’s experience.) She adds, “Moving forward with the current plan is not realistic. They simply haven’t mastered the material.”

“But it’s next Saturday,” Charlotte says. “What do you suggest we do?”

The rabbi suggests that Rock reads only two lines from their Torah portion (“That would be upsetting,” Charlotte responds), or that Rock conducts the entire service in English.

“No, I did not convert to Judaism to have my child be they mitzvahed in English!” Charlotte yells.

In the end, the they mitzvah doesn’t happen — because as it turns out, gender is not the only identity that Rock is working through.

“I’m not doing it. I don’t believe in it,” Rock tells their parents, the guests already assembled in the ballroom where the they mitzvah is set to take place. (The party was filmed in the Prince George Ballroom, a rentable venue in Midtown Manhattan.)

“Believe in what?” Rock’s parents exhort, offering expensive gifts if only the day would move forward as planned.

“I don’t want to be labeled as anything. Not as a girl. Or a boy. Or Nonbinary. A Jew. A Christian. Muslim. Or even” — and this prompts gasps — “a New Yorker!”

“So what, you’re nothing now?!” Charlotte asks.

The outburst represents perhaps the most significant challenge to Jewish tradition in the episode. Even as the role of synagogues in American Jewish experience has evolved, and even as communities craft new ways to include children who do not identify as boys or girls, the age at which a Jewish child takes on adult responsibilities has remained unchanged. In fact — as the mohel character on another TV show pointed out — becoming bar, bat or they mitzvah is automatic depending on a child’s age, not their preparation.

Charlotte doesn’t comment on this. Instead, she laments, “I’ve failed as a mom and I’ve failed as a Jew.” The show is about female friendship, but Charlotte’s longest and more durable friends, absorbed with their own issues, don’t counsel her in the moment. Instead, it’s a newer friend who urges her to stop chastising herself and think about what she really wants to have happen.

“This is not over!” Charlotte announces with fierce determination. “There are 300 people, 130 challahs, a rainbow chai and a trans rabbi. I did not come all this way and do all this work to have it end like this. Someone is going out there and getting they mitzvahed, today!”

But there is no coercion for Rock. Instead, the episode cuts to Charlotte completing the blessing said after reading from the Torah, draped in a tallit and beaming beside Rabbi Jen. The assembled crowd chants, “Amen.”

Carrie (Jewish actor Sarah Jessica Parker) leans over to Miranda (Cynthia Nixon) and, with a whisper, clarifies the situation: It is Charlotte, and not Rock, who has marked a milestone today. “Our little girl is a woman now,” she quips.

“Harry, now that Charlotte has become a bat mitzvah, please come and join us on the bimah,” the rabbi says. “And if anyone else from the family would like to come join us for this next blessing, they are more than welcome.”

The couple’s older daughter jumps to her feet, but Rock moves more slowly. Then, as a clarinetist plays “Oseh Shalom,” they, too, join the family behind the Torah.