From the New York Times

We couldn’t have guests, but the bar mitzvah ceremony would go on.

My son Zane celebrated his bar mitzvah this past Saturday. And to think I had been worried about a late-season snowstorm.

A week and a half earlier, when it was clear that the coronavirus crisis would force us to make some big decisions, I spent the day holding back tears, desperate for a paper bag to breathe into. The pressure I felt to both adhere to the new normal, ever-changing as it was, and still preserve tradition was immense. How could I look out for the needs of society, and also my son? 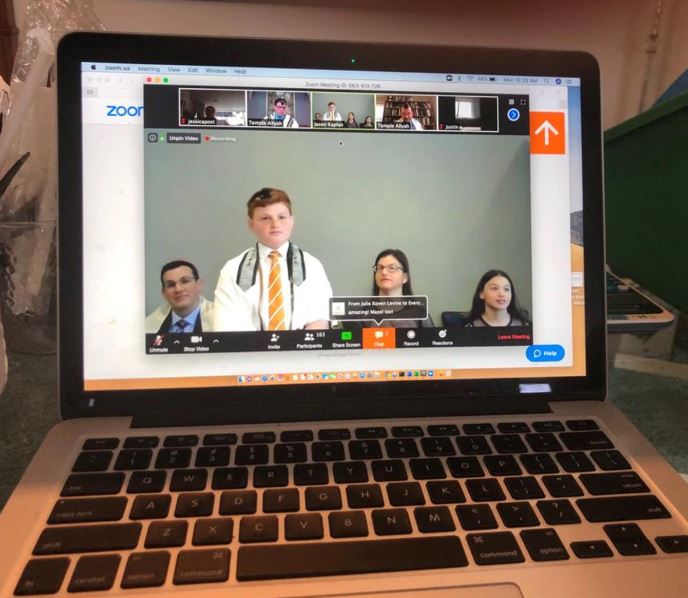 A bar or bat mitzvah is a rite of passage for a Jewish 13-year-old, and like many kids preparing for the ritual, Zane has been preparing for this moment since he had a mouthful of baby teeth. He has spent the last year learning how to chant a chapter of the Torah. His was the one meant to be read during the Sabbath that fell on March 21, 2020. It’s the same chapter (parashah) chanted by Jews all over the world on that day, as Judaism is centered around a shared lunar calendar.

You can cancel a party at the last minute. But it’s much harder to postpone a bar mitzvah.

Driving to the synagogue in that time of indecision, I asked Zane what part of that day he thought would be most meaningful.

“Leading the service and singing the prayers,” he said, still not fully grasping the larger picture. At that point, our world had not yet ground to a halt. He was just excited about the possibility of school being closed.

While Zane practiced reading from the Torah with his tutor, I met with Ariann Weitzman, associate rabbi at Bnai Keshet Reconstructionist Synagogue in Montclair, N.J., to discuss how we could do this responsibly.

“He will have his bar mitzvah,” Rabbi Ariann assured me. “We are spending all day tomorrow setting up cameras and figuring out how to live stream services.” (She then asked if I was still hugging people as she opened her arms to me.)

It is important to understand the significance of this. As Jews, we are commanded to celebrate the Sabbath by avoiding work. Jews have various ways of observing this commandment — or not — but you will be hard-pressed to find anyone using a cellphone in a synagogue during a Shabbat service.

Yet we are also commanded to put the preservation of human life above every other religious commandment. This is called pikuach nefesh. So even though technology is usually not permitted on the Sabbath, the rabbis at my synagogue decided that we had to use it because it is imperative to continue with tradition and to bring people together in community.

And so, all of a sudden, Zane had a theme for his bar mitzvah: “going viral.”

As the days wore on, the weight of worrying about family members who shouldn’t travel and the danger of assembling a crowd disappeared. Because the difficult decision I was facing was not my own anymore in the wake of new government restrictions. I was just hoping our family would be able to assemble at our synagogue before the state-imposed a shelter in place.

One week before the big day, as I was making calls to cancel the caterer and D.J., the initial grief began to dissipate. In fact, I felt giddy. Because what also disappeared was the minutiae that had been keeping me up at night — buying cases of soda and snacks, dropping off goody bags for out of town guests, assembling centerpieces (simple as they may have been) — none of which is truly essential to a religious ritual.

My only concern — aside from hand-washing, telecommuting and homeschooling — was ensuring that Zane still felt special. He’s the youngest of three boys, so for 13 years, this has been a familiar challenge. Without a printed program of his service, complete with baby photo and the lyrics from Joni Mitchell’s “Circle Game,” would he have that tangible reminder of just how much I love him? Months ago, he had already started practicing social distancing, barely allowing me to kiss the top of his head before going off to school. Expressions of love had already taken on a new form.

My husband, David, and I sent an email to all of our guests, inviting them to celebrate virtually. “Planning this bar mitzvah has always been about being surrounded by family and friends,” we wrote. “And we really hope that Zane will feel the love looking into a cellphone.”

We told Zane that we would have a D.J. party for his friends at some later time. He did express some disappointment that he wouldn’t have his party. But he understands that there’s nothing any of us can do, and he’s keeping perspective.

Going virtual allowed us to go big, including far more people than we had ever thought possible — kids from Zane’s camp and hockey team, distant cousins, co-workers past and present, schoolmates we haven’t seen since reunions. People from Germany and Israel tuned in, along with family, friends, and even strangers from all over the United States.

At the same time, this allowed us to pare down the moment to what really matters: Recognizing that while we all come from a multitude of faiths, fundamentally we share the same things — a need for connection to something bigger than ourselves, a desire to make this world a better place, and a sense of wonder as our children go about the hard work of growing up.

We asked people to share photos of themselves at home watching the service along with a note so we could put together an album. At the end of the bar mitzvah, I had 248 texts: Adolescent boys sitting in their basements in suits and ties; cats and dogs wearing kippot, ritual skull caps; neighbors throwing candy at their screens, mirroring our celebration as Zane’s brothers showered him with Jolly Ranchers and the four of us lifted him in a chair. Zane’s peers were glued to their devices, not as a distraction from what was happening on the bimah (altar), but in deep connection to it.

One family set up their living room to look like a makeshift shul; my friend from dance class wore a fascinator atop her head and remarked that she also sings the “Sanctuary Song” in her church.

Observing state guidelines, which grew even more strict that night, only a handful of people essential to the service came to the synagogue, scattered in chairs spaced widely apart. We maintained a six-foot distance while making a minyan (the 10 Jewish adults required by Jewish law in order to read from the Torah). At the end of the service, David and I gave a blessing to our son.

“Being Jewish and doing Jewish has never been easy,” we told him. “Throughout our history, Jews have met secretly in caves and cellars, persisted with ritual in ghettos and barracks. Our shul may be empty, but it is not a crime scene. We carry on right now, not in spite of hate, but out of love and care for each other who occupy this planet.”

This wasn’t the bar mitzvah we planned. But it was better than anything we could have imagined. And while I don’t want to ascribe anything positive to a pandemic, it was in many ways the bar mitzvah, in our hearts, that we wanted — except for not having family in the same room. After all, what better lesson for our son to learn than the importance of holding onto tradition, learning how to be resilient, and looking out for others.

Deb Levy is vice president of marketing and communications at Ovarian Cancer Research Alliance and the author of “Bury the Hot.”