Here’s a great (and very helpful!) article in NY Magazine by Kayla Levy about how to produce a bar mitzvah or bat mitzvah on Zoom, the video conferencing app that has dominated the virtual scene during the COVID-19 pandemic of 2020. Having officiated a dozen virtual bar mitzvah and virtual bat mitzvah ceremonies already this year during the pandemic, I can totally relate to Kayla’s article. I also think this article will be helpful for parents interested in using Zoom for their child’s bar or bat mitzvah. 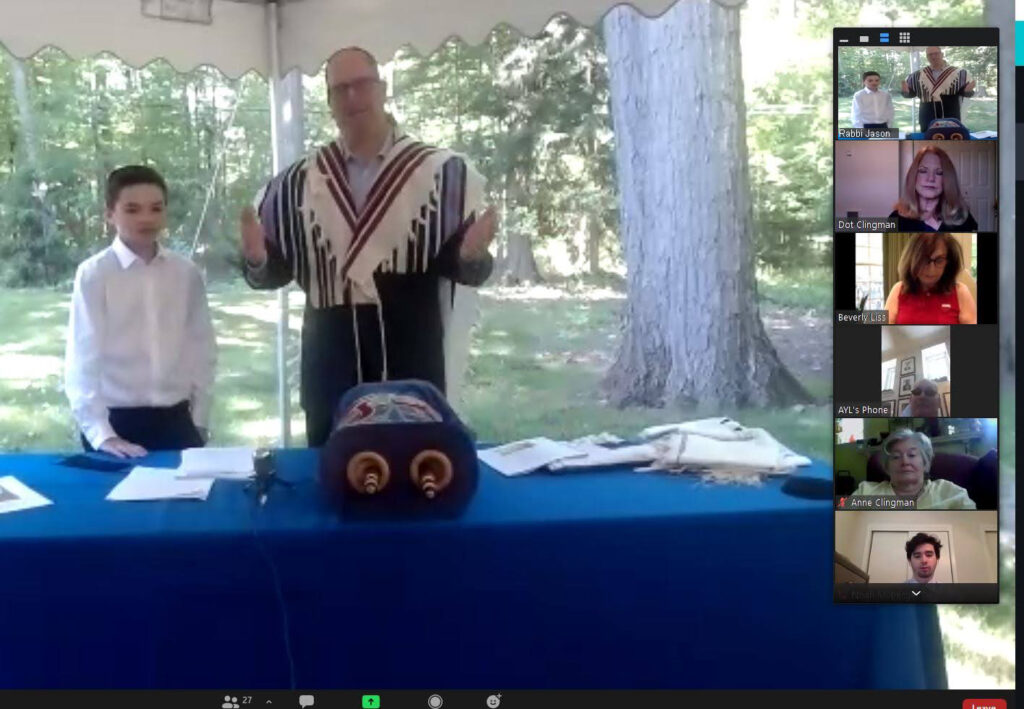 After New York banned nonessential gatherings, some Jewish tweens preparing for their bar or bat mitzvah began (begrudgingly) moving their ceremonies to Zoom. Kayla Levy, a Park Slope–based b’nai-mitzvah tutor and Strategist writer, spoke to clergy members from six synagogues across the city and six bar and bat mitzvahs about how to pull off this important rite of passage remotely, from implementing virtual l’dor v’dors to tracking down Torahs from shuttered shtiebels.

➽ Get your hands on a tikkun korim or chumash. Reading from the Torah is the focal point of a bar or bat mitzvah, but since getting access to an in-temple ark is going to be difficult at this point, most rabbis say that your best bet for reading from a physical text in quarantine is a tikkun korim (a Torah practice book), a chumash (a printed version of the Pentateuch), or an online resource (like Scroll Scraper). Rabbi Heidi Hoover of B’ShERT, a Reform synagogue in Brooklyn, uses the Kestenbaum Tikkun (which is readily available on Amazon).

➽ Or try to borrow the real deal. While watching a family friend read from two Torahs at his Zoom bar mitzvah on April 12, Aviva Preminger, who lives on the Upper East Side, saw that her son Nathan Hiltzik looked “crushed” at the prospect of not doing the same at his ceremony, which was slated for the following day. “As soon as the bar mitzvah ended, Nathan’s father, David Hiltzik, called his friend Alan, who unlocked their neighborhood shtiebel, a small family-run synagogue, and lent the family a Torah. “I put it securely in the back seat; it was probably on a religious and financial level the most expensive thing that was ever in my car,” says David.

➽ Keep your tutor in your ear. At her rabbi’s suggestion, Jordan Michaels wore an AirPod during her ceremony and stayed on the line with her Hebrew school’s principal to mimic the minute-by-minute support that she would have received from the clergy during an in-person ceremony. “It was helpful, even though our connection was delayed, because I got stuck once while reading from the Torah and she was singing it with me over the phone,” says Jordan.

➽ Do a dress rehearsal. “That way, you can make sure at the real event Grandma’s not holding the iPhone up too close to her face,” says Caryn Roman, the director of youth and family engagement at the Union Temple of Brooklyn.

➽ On the day of, dress fancy. Rose Brown says it felt “strange to get all dressed up just to be on a video call in my dining room,” but she still wore her flowered bat-mitzvah suit and even asked Zoom attendees to wear flowers too. “We’re going to make a virtual photo album, so I thought it’d be nice if people had a theme,” says Rose.

➽ Speaking of themes, don’t abandon them. Jordan’s ceremony was against a backdrop of her parents’ chuppah — the canopy from their marriage ceremony — and $200 worth of balloons in her canceled party’s color scheme: teal and lavender. “I originally ordered a single bouquet of balloons and a bat-mitzvah-themed balloon, but as I got more excited, I placed an order for more, plus some three-foot-tall golden balloons that spell out her initials, and a cake emblazoned in teal and lavender roses, to mimic Jordan’s original bat-mitzvah cake,” says her mother, Gina Michaels.

➽ Schmooze at the beginning. People joined Alex Sultan’s “Zoom mitzvah” slowly and chatted, which his mother, Randi Sultan, says felt much like an actual event. “Cousins in Maryland saw cousins in New York and said, like, ‘Hi, how are you? Oh, your baby got so big. How are things going?’ ” she says.

➽ Utilize the chat function for participants to send good wishes. “You don’t have a sign-in book, but you can preserve the chat for the family to read later,” says Roman.

➽ Strategically unmute participants. Even though “you can’t honor Cousin Sadie back in Detroit with an aliyah, Cousin Sadie can give wishes over Zoom, if that’s something people want to do,” says Rabbi Jeremy Kalmanofsky of Ansche Chesed, a Conservative synagogue on the Upper West Side. For Jordan Ehrenberg’s bar mitzvah at Union Temple, the members of the clergy re-created some of their traditions on Zoom by inviting family members to speak at the ceremony: Instead of physically passing down the Torah from older generations to the bar mitzvah, as is customary to symbolize the transferal of Jewish knowledge l’dor v’dor (“from generation to generation”), each one of his grandparents was asked to name “what in your heart you would like to pass to Jordan.”

➽ Dump candy on the bat mitzvah’s head. When everyone said “Mazel tov” at Rose’s virtual bat mitzvah after she’d read from the Torah, her brother crept up behind her and poured a bowl of Hershey’s Kisses on her head in lieu of the customary throwing of candy.

➽ Have a kids-only after-party. The night before Jordan Michaels’s ceremony, her father delivered a dozen cupcakes to close friends so they could all eat cake with her during a post-ceremony Zoom call. “It was a call that combined two different groups: my home friend group and my camp friend group,” she says. Afterward, her parents organized a 50-car parade down their block, complete with a visit from Jordan’s camp friend who lives on Long Island and her grandfather who lives in Queens.