NEW YORK – When the Bregman family was planning their son Daniel’s bar mitzvah this past November, parents Eleanor and Peter found themselves with a lot more responsibilities –and ownership – over the process than they had with the two previous bat mitzvahs they had planned. Daniel’s bar mitzvah, which took place in the midst of a global pandemic, was a Zoom-mitzvah.

While the Bregmans received support and guidance from the clergy at Romemu, their Manhattan synagogue, it was still a large undertaking.

“It was stressful but meaningful,” reports Eleanor. “Peter and I were figuring out who was responsible for what.” They embraced – and ultimately enjoyed – both the process and the bar mitzvah weekend, which they celebrated in person with some extended family at a home in upstate New York, and with nearly 300 guests who shared in the simcha on Zoom.

One year ago, no one had ever heard of a Zoom bar or bat mitzvah. They now rival Zoom weddings, baby namings, brisses, funerals and shivas as the most popular online Jewish rituals to attend during a pandemic. Zoom b’nai mitvahs may be the only ritual with research and best practices, thanks to Moving Traditions and their Zoom-Mitzvah 101: A Moving Traditions Guide to Thinking Creatively About Pandemic B’nai Mitzvahs guide.

The Moving Tradition organization, launched in 2005 to “help Jewish youth navigate the world and thrive as healthy, ethical and Jewishly connected people,” ventured in to the b’nai mitzvah space in 2018 as they launched their B’nai Mitzvah Family Education program to prepare Jewish clergy and educators to help 6th and 7th graders and their parents develop strong communication and empathy as they prepare to become and/or parent a teenager. The Moving Traditions B’nai Mitzvah curriculum centers around such questions as what it means to become a teen, navigating being the center of attention, parenting a teen (as compared to parenting a child), and obligations of hosts and guests.

Harlene Appleman, executive director of the Covenant Foundation, which supports the project, reports, “Moving Traditions has created a family engagement program that’s directly in sync with the delicate social and emotional moment of adolescence, which is a necessary recipe for infusing the B’nai Mitzvah ritual with meaning. The Covenant Foundation is fortunate to partner with such intentional educators.” 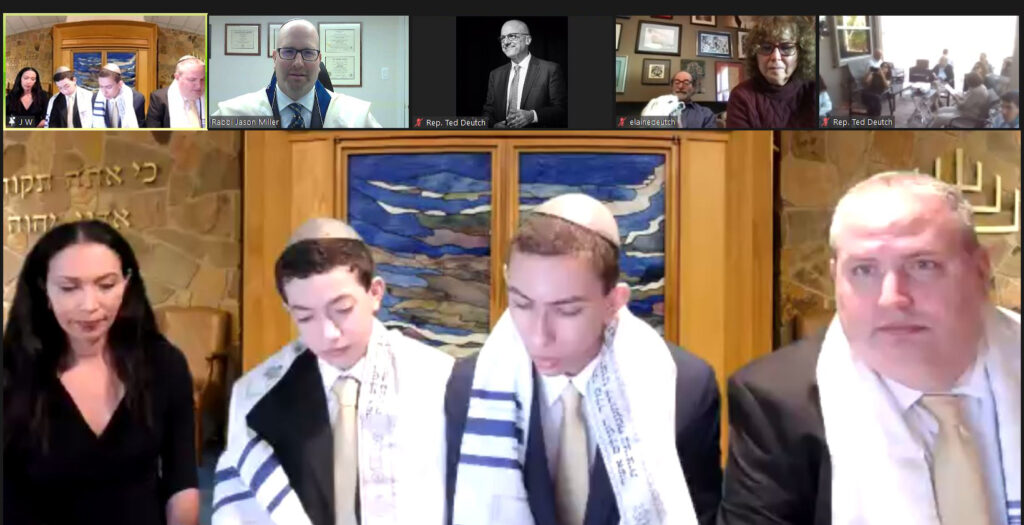 When looking at the data from the first year of the program, the Moving Traditions team found that of the more than 900 families surveyed about their experience with the curriculum, the majority of parents said that what they enjoyed most about it is just being together with their children. Being with other parents came in second.

Rabbi Janice Elster, Director of Youth and Family Education at Romemu, the Bregmans’ congregation, came across the program as she was looking “for a family experience to round out the b-mitzvah experience.” Elster and the Moving Tradition team prefer to use the gender-neutral term, b-mitzvah in referring to the life cycle event. She has found the program to be a “tremendous resource.”

Moving Traditions has even reworked and recreated lessons for a Zoom audience during COVID. Elster reports that she uses the curriculum to address issues of emerging adolescence through a Jewish lens and through Jewish texts.

“We start a conversation and the families continue it at home.

Elster’s role has evolved and expanded in the age of COVID.

“I am a rabbi educator who does video production, lighting and camera angles!”

While she proudly notes that Romemu has “always streamed services to a global audience,” she is now assisting more families as they prepare to celebrate Zoom b-mitzvahs.

Rabbi Daniel Brenner, Moving Tradition’s Chief of Education, reports that his organization’s interest and involvement in Zoom b-mitzvahs “grew organically” from a session they were teaching during COVID entitled “B-Mitzvah Lost and Found,” a program for parents which addressed the “new reality.” Brenner adds, “The ideas they had (about b-mitzvah) since age two weren’t going to happen. They were going to need to let go of the picture they had. It was a difficult conversation about loss.”

This webinar led to further conversations and suggestions about ways to meaningfully celebrate b’nai mitzvahs on Zoom.

“We are still sticking with our core—what is happening in this coming of age event,” reports Brenner, “But now, we are working with families as they plan an on camera event that requires creativity and being engaging in a virtual environment.”

Zoom Bar Mitzvahs and Zoom Bat Mitzvahs have become the norm, especially in non-Orthodox synagogues where use of technology on Shabbat is generally permitted. Given the increased popularity and need for guidance, Brenner and Pamela Barkley, Director of Strategic Implementation, wrote the Moving Traditions guide.

“Families were wrestling with the question of ‘How do we celebrate b’nai mitzvah online and still make it joyous, authentic and meaningful?” report Brenner and Barkley.

While some families have opted to postpone bar and bat mitzvahs until it is safe to gather in larger groups and celebrate in person, many synagogues and families have gotten creative. Zoom b-mitzvahs continue to evolve. The Moving Tradition guide has been useful in the process, offering such tips as “create the sacred space you want” (create a handmade banner to put in the background, create a bima that has a special table cloth and family heirlooms), put welcome questions in the chat (“How do you know the b-mitzvah family?”), invite guests to take selfie screenshots and put in a Dropbox, have family virtually “pass” the Torah from Zoom box to Zoom box, have friends throw candy – at your home from a distance or at the camera in their own homes!

Through the process of planning Zoom b-mitzvahs, Brenner notes that families have become less reliant on professionals, they are more open to rituals and they are asking what parts they can do at home. And they are finding the process to be very meaningful. The Bregmans worked closely with Romemu clergy yet remained extremely active, made important decisions and took responsibility for nearly every aspect of the bar mitzvah.

The Bar Mitzvah planning process and the bar mitzvah day were joyous yet had its stressful moments. Daniel’s sisters made a banner, and hats were delivered to nearly 300 guests.

“I was stressed out about the usual things – writing the D’var Torah, losing his place in the Torah…” reports Eleanor. In the end, it was a fairly “typical” bar mitzvah – with some wonderful additions.

“He did what he would have done—he studied his portion, read the Torah, delivered his D’var Torah.” Eleanor was delighted. “It was what it should be and was all about.”

And many additional people were able to join from a distance.

“There were all these people we could invite – Israeli friends and family in England and France who would have never been able to come,” notes Eleanor.

The bar mitzvah consisted of more than just a Shabbat morning service. Daniel put on tefillin with his father and uncles on Friday. There was a family Shabbat dinner Friday night, and a family celebration on Saturday night.

And Daniel hardly felt like he missed out on a “real bar mitzvah.” He reports, “It was a lot less pressure; online was so much easier!” He also enjoyed the tech aspects (“it was pretty cool”) and being lifted up on a chair at the Saturday night family bonfire.

All of the important aspects of bar mitzvah were there for the parents as well. Peter felt it was important for Daniel to have the experience – like his sisters – of delivering his D’var Torah “not to an empty room, but feeling like he had a real sense of a congregation.” Peter acknowledges that the experience is a “little stressful” and “requires maturity,” but felt “stepping in front of the community and showing up with scholarliness” was an important one. Toward that end, he located seven screens around the house so Daniel could deliver his speech to 300 unique faces. The family also added such tech features as three cameras, providing guests with a Torah view, back and forward views. In the end, both parents agreed. “It far exceeded our expectations, and it felt like a lot less pressure.”

Eleanor and Peter are not alone in feeling the bar mitzvah was a refreshing “back to basics.”

“In some strong way, educators and clergy got their wish,” observes Barkley.

“B-mitzvahs had gotten out of hand and become commercial. Now, it is focused only on the ceremony and the immediate family. Hopefully, after COVID, clergy can help families understand that, even when you can turn it back over to clergy, it can still be personalized and boiled down to its core – passing the Torah through the generations, reading Torah, delivering a D’var Torah and thanking family.”