Unaffiliated Jews Get Creative for Bar and Bat Mitzvahs

Unaffiliated Jews Get Creative for Bar and Bat Mitzvahs

Here’s a great article from the Jewish Exponent about Unaffiliated Jews being creative with their children’s bar/bat mitzvah ceremonies:

There was no question that the Danskys of Livingston, New Jersey, were going to have their children Bar and Bat Mitzvahed. There was also no question of joining a synagogue to do so. “We’re not that religious,” explained Tracy Dansky, a mother of three, but her husband, also Jewish, felt the rite of passage was important. So they did what a lot of their neighbors were doing: Hired a rabbi, had their daughters tutored in Hebrew, and booked a private room for a joint ceremony at Lucky Strike, the Times Square bowling alley and event venue.

A few years later, with her youngest, Max, approaching Bar Mitzvah age, Dansky took it up a notch. She hired Ellen Paderson, a Bourne, Massachusetts, specialist in destination events, to arrange a beachside Bar Mitzvah for Max at an all-inclusive resort near Cancún, Mexico.

“It was a really great time,” said Dansky of the March 2018 event. Thirty-five friends and relatives joined for a five-day getaway that included a golf outing, a sunset catamaran cruise and Max’s ceremony, officiated by a retired American rabbi.

Despite all this, “it cost less than doing a fancy party like people do here” in New Jersey, Dansky noted. “It was a more economical choice, and it lasted longer.”

The Danskys are part of a growing trend: B’nai Mitzvahs that take place outside the traditional framework of synagogue and Hebrew school. As the number of unaffiliated American Jews grows, more families are taking a DIY approach to the milestone that remains a touchstone of Jewish identity.

Rabbi Gidon Isaacs, the assistant rabbi at Temple Emanuel of Cherry Hill, New Jersey, calls the shift generational. More than their elders, younger Americans “are not joiners,” observed the rabbi, a former education director who has devoted his career to making religious school more engaging. “They weren’t raised with membership, generally speaking, as a value.”

The opt-out mitzvah can take many forms. Most families hire a rabbi or cantor for private or small-group tutoring, and to officiate. Six months to a year of weekly sessions is typical — though some children study for years, approximating the depth and breadth of Hebrew school. Venues are the same as for weddings: golf clubs, banquet halls, destination resorts and even private homes. 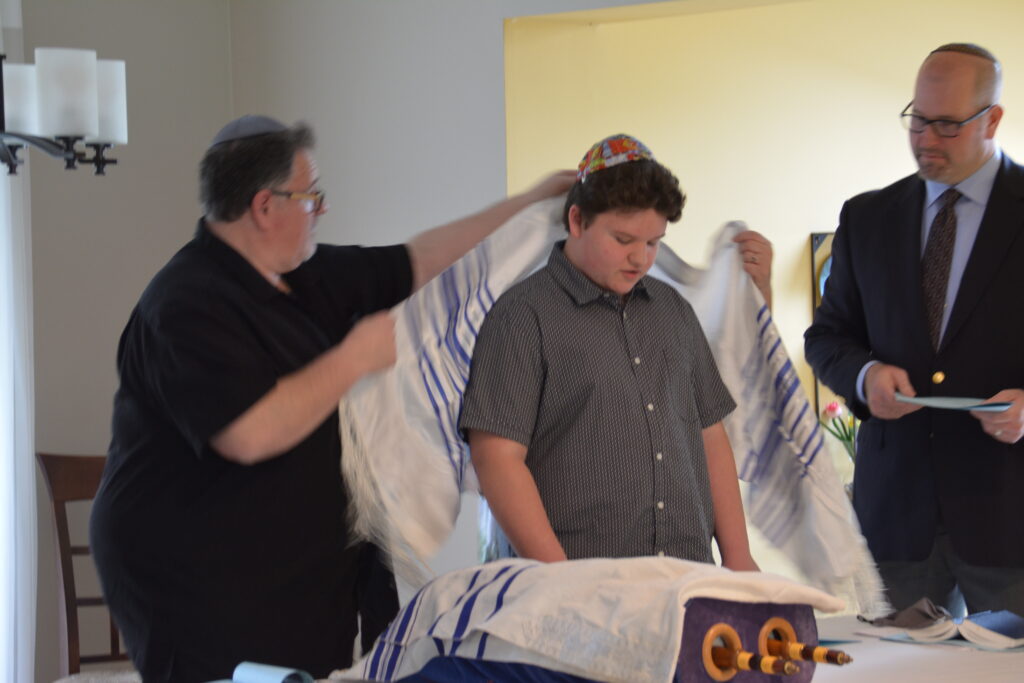 Unaffiliated Jews can celebrate a bar mitzvah ceremony too. You don’t need Hebrew School or synagogue membership for a bar mitzvah.

“People are getting more and more into doing it outside of a temple,” said Paderson, whose B’nai Mitzvah business has exploded in the past 15 years. Like others who cater to DIY families, Paderson handles everyone from nontraditional and interfaith families to special-needs children who aren’t comfortable in Hebrew school to “Jewish-Jewish” families like the Danskys, who just aren’t temple types.

All-inclusive Mexican resorts, cruises and Italy are the favored destinations; Paderson works with a network of local officiants, as well as a cantor who tutors via Skype and flies where needed. The average family spends $3,000-5,000 on the event, with an additional $2,000-3,000 for the preparation and clergy.

That cost, even for a destination affair, is typically far less than families would pay for years of synagogue dues and Hebrew school. But money is hardly the prime motivator for most DIY families.

More commonly, it’s the collision of twice-a-week Hebrew or Sunday school with soccer practice, swim meets, youth orchestra, chess club and the myriad other obligations of today’s hyper-scheduled tween. Boredom with Hebrew school, and lack of connection to synagogue or organized religion, are other commonly cited factors.

Missy Gerber, a stay-at-home mother of three boys in Morristown, New Jersey, sent her kids through temple preschool and several years of Sunday school. “They hated it,” she said. “It was four hours on a Sunday … They only have two days off from school, and one of them, they’re back in the classroom. And it’s boring.”

Then there was the tug of sports and other extracurriculars which, besides being fun, was where all their friends were. The Gerber boys “kept missing things,” their mom recalled.

Yet once Danny, the oldest, hit middle school, “I thought: I have to figure out what to do, because I still want him to have a Bar Mitzvah.” Gerber hired Cantor Scott Borsky, a Cherry Hill officiant, to tutor Danny weekly for a year before his 2016 Bar Mitzvah at the Laurel Creek Country Club; she did the same for her middle son, Jack, who had a backyard ceremony last year.

Many families, including the Gerbers, appreciate the smaller audience of a private event.

“If you have a normal synagogue Bar Mitzvah, there are hundreds of people in attendance, and that’s a lot of eyes on you, especially if you’re not super confident,” explained Missy Gerber. Her sons’ affairs were fairly typical of DIY mitzvahs, with around 35 guests.

“It was a great experience, having all my family there,” said Danny, who is turning 16. “And I felt I learned a lot.”

Learning is perhaps the most contentious variable of a DIY event; in the absence of a formal Hebrew school curriculum, it’s up to the family and the officiant to decide what Jewish education means. The private route is typically more abbreviated — but it’s also more personalized, potentially resulting in a more enduring personal connection to Judaism.

Many are troubled by a trend that chips away at the traditional fabric of Jewish communal life, removing families from the congregations where milestones have traditionally been celebrated.

But Rabbi Julie Greenberg, who has shepherded kids through an alternative B’nai Mitzvah program for 25 years, noted that today’s Jewish communities can simply look different.

“One goal I have is to help kids become part of a community, not just individual Jews going through an experience,” said Greenberg, the longtime rabbi at Congregation Leyv Ha-Ir—Heart of the City in Philadelphia. “Americans are geared to find individual solutions.”

Greenberg’s solution is to create a cohort of independent learners. At any given time, five to 15 youngsters attend a Sunday afternoon school at her Mt. Airy home that accommodates varying interests and preferences. Hebrew is optional; a Bat Mitzvah could as easily be a traditional Shabbat meal as a religious ceremony.

“A Bar or Bat Mitzvah is a rite of passage that celebrates growing up in a Jewish idiom,” Greenberg explained. Many of her families aren’t interested in religious Judaism, “which is still the focus of most synagogues,” she added. “But they want Jewish literature, Jewish values, Jewish ideas, Jewish culture. My goal is they can step into a Jewish experience anywhere and feel some familiarity.”

“It’s not just about learning the Shema, the Mi Chamocha,” he emphasized. “It’s about becoming a son or daughter of the commandments.”

This year, Borsky will officiate at his 2,100th DIY mitzvah. He left his temple job nearly a decade ago, following a crowd of overscheduled congregants out of the pews — and into the community, where he leads informal Shabbat and holiday gatherings with his organization, Synagogue Without Walls. Flexibility is his calling card: The cantor will tutor for an hour or half-hour, in person or over Skype, in between baby namings and hospital visits (he is also a chaplain).

Missy Gerber, for one, is a satisfied customer.

“Cantor Scott really taught about the religion, which is what I wanted,” she said. “It wasn’t just like, ‘Here, memorize this thing that has no meaning to you.’” More than Hebrew school could have, Gerber added, the DIY approach “really helped my sons get in touch with their Judaism.”