Whether you never had a bar or bat mitzvah as a teen or your chose Judaism as an adult, the adult b’nai mitzvah ceremony is a wonderful way to mark this lifecycle event. 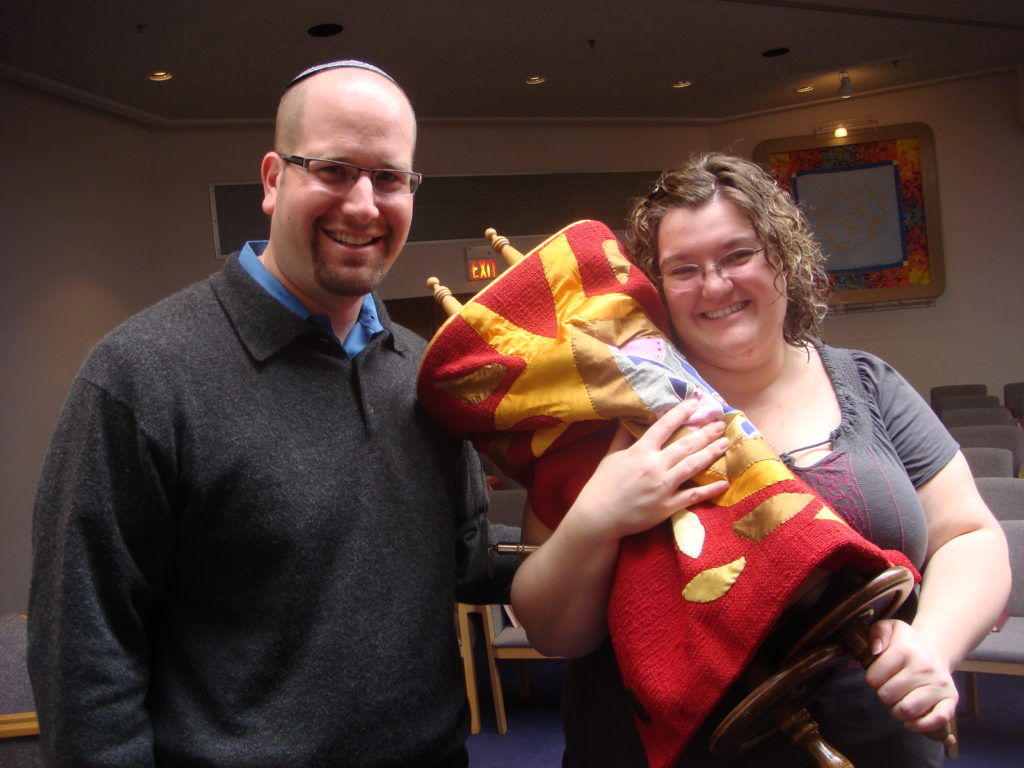 Most descriptions of an adult bar or bat mitzvah tend to focus on people of a certain age: women old enough to have grown up when females had no ritual purpose on the bimah (pulpit) of any synagogue and 83-year-old men who celebrate a second bar mitzvah, having lived a life span of 70 years since the first.

But adult bar or bat mitzvah happens at many ages and for many reasons. The bar or bat mitzvah ceremony isn’t a mandatory rite of passage; by Jewish law, a boy reaches adulthood when he turns 13 and a girl at 12, no ceremony required. The very lack of necessity makes such an effort even more remarkable as a concrete, hard-won, and public affirmation of Jewish identity and commitment.

Why No Bar/Bat Mitzvah Until Now?
Most of the reasons that Jews don’t have bar or bat mitzvah ceremonies when their children fall into two broad categories: couldn’t or didn’t want to. “I was feeling kind of atheistic at that point in my life,” said Ron, a film producer in Los Angeles who grew up belonging to a Conservative synagogue on Long Island. “I remember talking with the other boys at my temple, and they all said they were doing it for a big party and lots of presents. And I just felt at that point that, not having the religious conviction, I didn’t want to go through this ceremony just to have a party and presents. It felt very hypocritical to me.”

“My parents were not at all religious, and they just didn’t believe in having a bar mitzvah,” said David, a Toronto businessman raised in Queens by “left-wing Jewish educators.”

The spiritual alienation felt at 13 by Jane, a Los Angeles copyeditor, came from a different source. “That was right when my parents got divorced, and I hated them,” she said. “I didn’t feel very religious at that point.”

Converts to Judaism, who of course weren’t Jewish at 12 and 13, form a natural and ever-expanding source of adult bar and bat mitzvah candidates. Joe, a vice president of his Reform temple on Cape Cod, celebrated his bar mitzvah at age 45, 13 years after his conversion. “In those 13 years, I had become a Jew. Clearly, it was time for me to take the next step. I wanted to set an example for my children, and they weren’t old enough until recently to appreciate (or remember) such an event.” On the personal level, Joe adds, “I wanted a deeper understanding and appreciation for my chosen religion.”

By contrast, Susan was already studying for her bat mitzvah at her suburban New York synagogue at the time she became Jewish. “I needed and wanted to know more. As a Jew, I have the right to embrace all that this religion has to offer, and I have every intention of doing just that.”

Ron revised his thinking about religion in his mid-20s. “I had rediscovered my Judaism, and I had rediscovered my belief in God,” he said. “I think the experience of going through [bar mitzvah] when it meant something to me personally and spiritually was so much richer than it might have been doing it as a stupid 13-year-old kid.”

Sue had chosen summer camp over the type of bat mitzvah girls in most Conservative synagogues were offered in the 1960s. She decided, after losing a husband to cancer at age 22 and finding solace in an egalitarian congregation, that “I finally felt like a grown-up and it was time to make a public proclamation to that effect with a bat mitzvah.”

Jane, who was 25 when she celebrated her bat mitzvah at a Conservative synagogue, said she doesn’t need to rebel anymore. Her mother, whose family was “not that religious” when she was growing up, will share the day with Jane, in part to set an example of Jewish commitment for Jane’s seven-year-old sister.

David says his bar mitzvah at age 42 wasn’t the culmination of a spiritual quest but was more about identity. “I felt I needed to read from the Torah; I felt it was something that I didn’t do as a youngster and that being Jewish and having a Jewish identity was important to me,” David said. “As much as I will deny having any type of spiritual connection, I have to say that reading from the Torah was a magical experience.”

Studying Together Creates Community
Adults who pursue bar or bat mitzvah generally study in a synagogue-based class or one-on-one with a rabbi, sometimes for a year or more, learning Hebrew and the skills needed to conduct part of the service, and analyzing the relevant Torah portion. Studies can also include Torah chanting, haftarah (a reading from the prophetic books of the Bible), theology, and Jewish history and tradition. The ceremony may be a solo effort or a shared experience among the members of a class.

“I enjoyed sitting around the table with the rabbi and the other students, discussing different aspects of Judaism and Torah and Hebrew,” Ron said.

Susan called the friendships that formed in her class “the icing on the cake. The eight of us remain friends and are there for each other in good times and bad.”

“The event was one of the most joyous and fulfilling experiences of my life,” Joe said of his class’s ceremony. Along with families and friends, he said, the hall “was packed with members of the congregation who came just because it was an important event that they wanted to witness. Many parents came with their children.”

Susan called the enormous turnout at her bat mitzvah “truly a community celebration.” But just as important, she said, the ceremony didn’t represent the end of a path, but a milestone in her journey as a learner. “The class served as a wonderful overview of this religion, but it’s only the tip of the iceberg,” she told the congregation from the bima. “My education has just begun.”