“My two children don’t live in Israel and I lost my husband a long time ago,” said Bella. “This event was closure for me.” 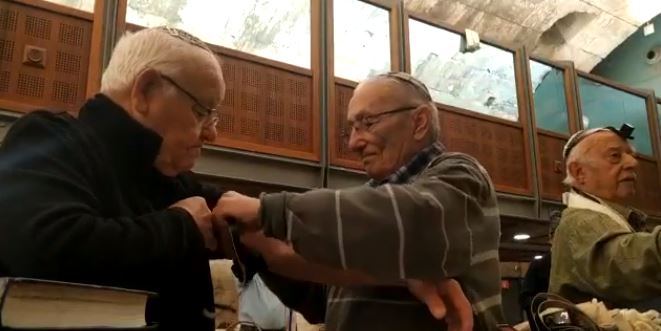 The celebrations were conducted in collaboration with the “Perah L’Nitzul” project of the Social Integration Administration in Rishon Lezion, the Community Resources Department in Social Inclusion Administration, the Western Wall Heritage Foundation, the Ministry of Social Equality and the Claims Conference. “We embrace Holocaust survivors all year long,” said Rishon Lezion Mayor Raz Kinstlich. “We placed a goal for ourselves to reach every Holocaust survivor in the city, to help them with all their needs…and to hear their stories. I am very proud of the many activities that the municipality organizes for the survivors and thank the many volunteers from the city who take part in these activities.”

Dozens of Holocaust survivors took part in the symbolic ceremony that took place before International Holocaust Remembrance Day. The survivors said that the event was especially exciting for them. The b’nai mitzvah and b’not mitzvah prayed and sang the song “Hevenu Shalom Aleichem” (We Brought Peace Unto you) with tearful eyes. All the participants took part in a celebratory meal afterwards with singing and dancing. One of the participants was Bella Walt, 91, who was born in Poland and who lived in a ghetto for a short period of time before arriving at a refugee camp in Siberia with her mother. She arrived in Israel in 1966 and was one of the founders of Rishon Lezion. “My two children don’t live in Israel and I lost my husband a long time ago,” said Bella. “This event was closure for me.”

Ze’ev Boirski, 87, was nine-years-old when the war broke out. He turned 13 in a refugee camp in Cyprus. “I never imagined that I would celebrate a bar mitzvah,” said Boirski. “I want to thank the Rishon Lezion municipality and the mayor for everything that he does for us Holocaust survivors. I have no words to explain how tremendous this was for me.”